Grid-connected solar power is growing fast in India, going from just a few megawatt (MW) in 2009 to over 1000 MW by mid-2012. 1000 MW of solar power can supply over 20 lakh Indians with electricity. Solar uses no fuel and is therefore one of the greenest ways of generating electricity. While many of the largest solar powered countries have focused mainly on rooftop installations (over half of German solar power capacity is on rooftops) almost all of India's solar power is generated through large plants installed on the ground (mainly in the semi-desertous areas of Gujarat and Rajasthan). This may however soon change as land prices increase and policy enables rooftop solar in India to connect and make use of the grid.

The Prayas Energy Group, a non-profit research organisation based in Pune, has recently released a policy paper discussing rooftop solar in India (http://www.prayaspune.org/peg/publications/item/186). The main challenge that the report acknowledges is that the situation with solar power is changing faster than most policies can keep up with. The price of solar panels has decreased at increadibly speeds for the last three years and the process of creating and changing policy, which is neccessarily a time-consuming task, has little chance of keeping up.

A solar rooftop in Agra, Uttar Pradesh, providing power to a university. The plant is not connected to the grid and uses battery back-up due to a lack of guidelines on how to connect rooftop solar to the grid. Photo credit: Joel Kumar

As an example the Central Electricity Regulatory Commission (CERC) recently released new guidelines (http://www.cercind.gov.in/2012/orders/242_SM_2012dated29oct.pdf) on solar power  estimating cost of building a 1 MW plant in India to only Rs. 8 crore, less then half of what it was three years ago (16.9 crore in 2010-11). Since solar projects need no fuel, almost all cost is in buying and installing the panels and a per MW cost of Rs. 8 crore makes a tariff of Rs 7-8 per KWh from solar possible. This has created problems with policy such as the Rooftop and Small Solar power Generation Programme (RPSSGP). RPSSGP was launched two years ago and used the old estimates of CERC to establish a tariff of about Rs. 18 per KWh for projects, counting on that it would give developers a moderate return on investments. But as most projects just came online recently and didn't have to buy panels until last minute these projects will by most calculations be extremely lucrative, giving 50 % or higher profit margins, and costing the government budget much more than what would have been necessary. If the tariff recieved is Rs. 18 per kWh but the cost for the plant is only Rs. 8 crore then a 1 MW plant can make a profit of 1.6 crore per year, for 25 years!

In rooftop solar there is an added uncertainity as there are few solar installations up so far on rooftops in India. Older projects exist using battery-storage (for example on the roof of our own office at the Centre for Science and Environment in Delhi) but few real grid-connected solar PV projects exist. With fast-changing markets, installed projects that are more than a year old are not a reliable pointer as to the actual cost of solar power. Gandhinagar solar rooftop scheme with a total of 5 MW spread over multiple rooftops has come the furthest but is yet to be finalized. It is therefore difficult to know what exactly a fair price would actually be. There is also the issue that electricity tariffs and solar insolation (the amount of sunshine reaching the panels) varies all over the country. Solar rooftop installations in a place like Maharsthra where solar insolation is high and electricity tariffs are high would be profitable long before the north-eastern states; where electricity tariffs are low and solar insolation is low. 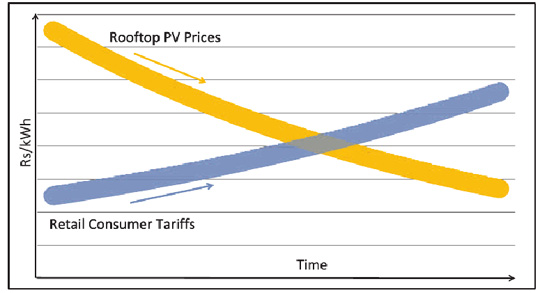 The increase in general electricity tariffs are in part due to a faltering of coal and gas supply that cannot keep up with a fast increasing demand for electricity. According to the Prayas report the highest consumer tariffs in Mumbai and Pune are already as high as Rs. 10.91/KWh while solar rooftop systems recently bid out has come in at between Rs. 8.87/KWh (Raipur Airport) and Rs. 11.21/KWh (Gandhinagar solar rooftop project - 11.21/KWh is including the Rs. 3/KWh cost the company, Azure Power, pays private and government roof-owners to rent the rooftops).

If the Gandhinagar project is succesful then the tariff where solar power is profitable could be as low as Rs. 8.21/KWh if the producer owns his own rooftop. If this tariff is correct then this would save a commercial electricity user (over 50 kW) in Mumbai, who otherwise pays Reliance Infrastracture, private electricity distributor, Rs. 10.91/KWh (http://www.rinfra.com/pdf/Tariff_for_uploading-130910.pdf), a full Rs. 2.7 per unit of electricity used.

To let rooftop solar compete fairly with grid-electricity it would be necessary to allow for net-metering. With net-metering a building owner with a solar rooftop installation can feed the electricity produced by the rooftop solar panels into the grid and deduct the units fed-in to the grid from the general electricity bill. This would mean that the owner still has the security of the grid and at most pays the same tariff as normal for grid electricity but for each unit produced by the solar panels it would be one less unit to pay for, directly taken from the highest slab.

With net-metering no agency would have to try to guess the appropriate tariff for rooftop solar, instead the price would be set by the market and the first adopters would be those with the highest electricity tariffs since they would have the most to gain. Industry and commercial undertakings are the ones with large rooftops and those who can afford to pay the highest tariff. The report by Prayas also suggests that if a solar rooftop producer fed in more solar electricity into the grid than they used, the excess could be forwarded to the next month to allow for seasonal differences. Continuing with the monthly billing schedule net-metering would mean little or no extra work for power utilities, all they have to do is read the meter as usual.

Load curves for Mumbai in summer and winter, as compared to solar generation. Solar lines up well with peak demand as AC usage increases in Indian cities. From "Solar Rooftop PV in India" Courtesy of Prayas Energy Group.

Net-metering would avoid the problems of policy decisions as well as avoid the risk of abuse of the system by producers feeding in electricity from Diesel Generator (DG) set generated electricity and claiming solar tariffs (see my earlier blog post on this: http://re.indiaenvironmentportal.org.in/blogs/dearth-ideas). Net metering would further put the cost on those most able to pay and the grid-connection would mean that no batteries would be needed, which add cost both economically as well as environmentally.

On the negative net-metering would mean that power utilities lose out on their best paying customers. Commercial and industrial customers with rooftop solar would be using solar during their peak-hours instead of buying the expensive, and for the utilities lucrative, grid power.    According to Forum of Regulators, in Maharashtra, 0.01 % of the consumer base (large commercial consumers using over 1 MW) provide almost half of the income for the utilities (http://www.forumofregulators.gov.in/Data/Meetings/Minutes/32NDFORMINUTES.pdf) so utilities would want to hold on to their biggest and best paying consumers to be able to still subsidies domestic and agricultural consumers. This is a problem the Prayas report avoids, however with the growing demand and lagging supply of Indian utilities, the impact might not be noticable for a long time as Indian commercial and industrial establishments are anyway looking for electricity anywhere they can find it.

Some policy is still needed to make net-metering for solar rooftops in India a reality. The Ministry of Power need to notify the Central Electricity Authority's guidelines on grid interactivity so that rooftop solar plants can feed into the grid (see the draft here: http://cea.nic.in/reports/regulation/distributed_gen.pdf). After this the Ministry of Renewable Energy needs to come out with a national policy on rooftop solar and State Electricity Regulatory Commissions need to create state level regulation for how net-metering will function.

When policy is finalized what will be needed is an industry of solar rooftop developers and this industry in turn will need engineers and electricians who are trained in installing solar power on rooftops and connecting it to the grid. Thousands of skilled jobs can be created in this way.

Because of the lack of steering from the centre, the state of Kerala has already gone the route of making their policy for solar rooftop one where the solar installations are not connected to the grid. This means that they will need battery banks, which come with their own environmental problems. Net-metering could bring rooftop solar into the mainstream and would need very little involvement from an overstrained bureaucracy and budget. Doesn't that sound like a good idea?