Shrimp cultivation began in Bangladesh in the mid-1970s when exports totaled 4.7 million dollars a year.

Until the global economic crisis, it was a 534-million-dollar-a-year business, with 42,000 tons of exports, mainly to the United States and Europe. After the garment industry, shrimp production ranks second in Bangladesh in terms of the sector’s ability to earn foreign exchange. Not only does this crop earn valuable foreign exchange, but the sector also employs significant numbers of rural workers and provides a livelihood for households throughout much of Bangladesh. A study by USAID estimates that as many as 1.2 million people may be directly involved in shrimp production with an additional 4.8 million household members supported by the industry. See also

The local environment and the means of livelihood of the local people have been greatly damaged due to shrimp cultivation.

Most of the shrimp culture being practised is by the extensive and improved extensive methods, known as Gher culture. Gher means an enclosed area characterized by an encirclement of land along the banks of tidal rivers. Dwarf earthen dykes and small wooden sluice boxes control the free entrance of saline water into the enclosed areas. In the Gher, the sluice gates are opened from February to April to allow the entry of saline water.

The practice of shrimp culture needs saline water as an input to the shrimp pond. Sluice gates are normally allowed to open two or three times when the salinity in the shrimp pond decreases and saltwater exchange from the river is necessary. As a result, heavy sedimentation from upstream water settles in the riverbed and canal bed, causing waterlogging in the shrimp ponds and on agricultural land. The shrimp-processing depot and industry drain their pollutants into the river, causing water pollution. Years of this practice has increased the soil's salinity and reduced its fertility. Stagnant saline water in shrimp ponds often seeps into the groundwater making it useless. There are also increased costs to health from a rise in water-borne skin diseases (resulting from stagnating and polluted saline water).

Deforestation reached an unprecedented scale in the 1970s and early 1980s when the Asian Development Bank (ADB) and the World Bank gave funds to the government to promote shrimp farming for export. For instance, CHOKORIA Sundarban in the coastal district of Coz's Bazar in southeast Bangladesh, once a reserved and protected mangrove forest, is deserted today. The roots provided a safe shelter to the fish shrimp and aquatic reptiles. But, today, most trees, animals (such as tigers, deer and wild cats), and fish species have disappeared. From 7,938 hectares (ha) in 1976, the mangrove had been reduced to a mere 188 ha in 1995. Shrimp farms have replaced most of the once dense forests. As much as 38% of global mangrove destruction is linked to shrimp farm development. Global mangrove deforestation rates now exceed those of tropical rainforests, the damage being caused by pollution and by clearing of the vegetation to make way for new farms. Experts fear that the shrimp culture can gradually increase acid sulphate in the soil to such an extent that regeneration of mangroves may become impossible.

According to the International Collective in Support of Fishworkers (ICSF) while shrimp farming brings fortunes to some, it incurs significant opportunity costs for almost every household. Vegetation, crops, ﬁsh and livestock are seriously damaged by the process of shrimp cultivation. The opportunities lost include those for rearing poultry and livestock, growing fruit trees, kitchen gardening, culturing fish in homestead ponds, availability of cow dung and firewood for fuel, and access to fresh drinking water. If all the benefits which a peasant household derives from these sources (in terms of direct consumption, cash income and employment) are taken account of, then shrimp cultivation is far less profitable than is claimed. 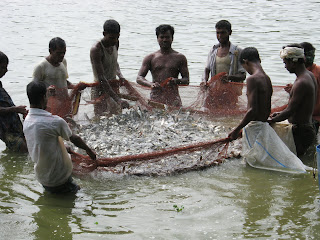 In shrimp culture, income distribution is heavily biased in favor of the owners or controllers of the field. According to a recent report, 70 per cent of the shrimp fields in the greater Khulna district are owned or controlled by outsiders, 20 per cent by local rich landowners and the remaining 10 per cent by the small and marginal farmers. Shrimp entrepreneurs tend to maximise their profit by expanding the area under cultivation rather than intensifying it-reflected clearly in the low yield data. Often expansion of shrimp farms is achieved through coercion, forcing the poor to give up their lands

A British pressure group, Environmental Justice Foundation (EJF) says some prawn farms are controlled by criminal gangs who use violence and intimidation to force away traditional farmers. There are cases, the group says, when they have their crops flooded with saltwater to make way for prawn farms.

A number of farmers were forced into the business when big shrimp farm owners flooded their fields with saline water. Several police cases have been lodged against farm owners and their musclemen for trying to open the sluice gates and flooding paddy fields with saline water. The issue also had a political impact. During the 2008 national election only those politicians won who promised to fight saltwater aggression. Over the past few years, Thousands of farmers staged protests against saline water based shrimp cultivation.